Waving Goodbye to Human Clinical Trials in a Post-COVID Landscape 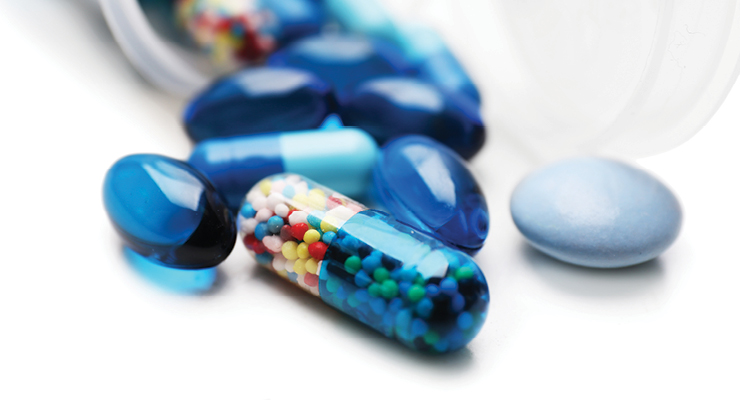 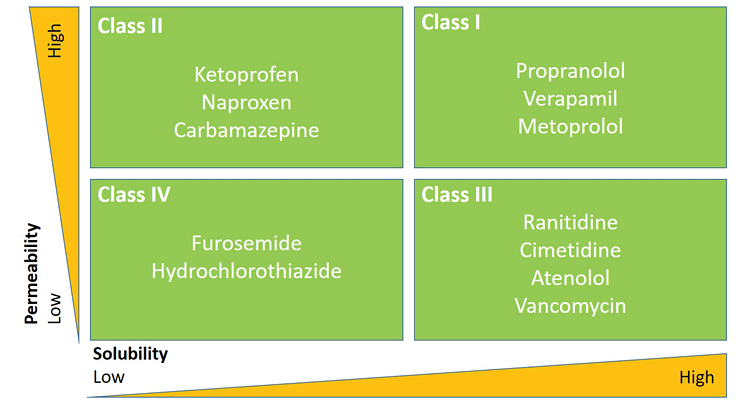 Figure 1: The relationship between solubility, permeability and BCS categories. 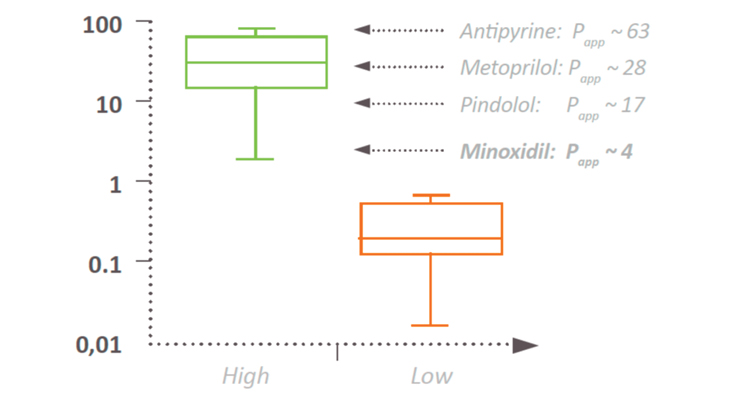 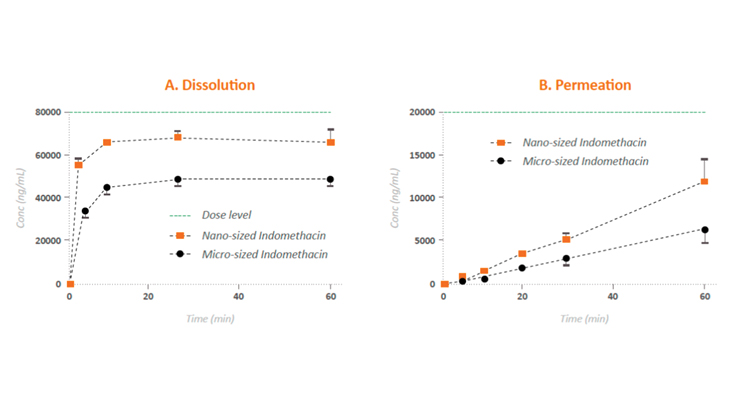 Figure 3: Comparative data from the study of two formulations of indomethacin using IDAS™.

Since 2000, the U.S. Food and Drug Administration (FDA) has advocated the use of the Biopharmaceutics Classification System (BCS) as a regulatory mechanism for the waiver of bioequivalence (BE) studies in the development of new, orally dosed drugs and generic compounds. Over the following two decades, biowaivers have been extended to cover bioavailability (BA) and BE studies for a wider range of compounds, yet the take-up of this expanded opportunity has been relatively light. Pharmaceutical companies regularly employ biowaivers for Class I compounds (those that demonstrate high permeability and solubility), but they are failing to capitalize on the opportunity for new drug submissions, as well as those that fall into the Class III category (high solubility and low permeability).

COVID-19 has undoubtedly amplified the usefulness of systems that expedite drug development and minimize the use of human studies. So, how do pharmaceutical organizations make best use of the biowaiver toolkits available and take these learnings into future drug development programs?

This article discusses the untapped potential presented by the current biowaiver regulations, how and when they can be used to expedite new drug development, and the pitfalls that must be avoided for smooth and rapid regulatory approval.

The problem with oral drug absorption and in vivo trials
Drug absorption is a key component of a drug’s safety and efficacy profile; if it is absorbed too quickly, then adverse outcomes can emerge, too slowly and the effects may be insufficient. Unlike intravenous, intramuscular or subcutaneous drug delivery mechanisms that bypass the gastrointestinal (GI) system, oral drug absorption is much more complex, impacted by in vivo conditions, such as gastric emptying, the pH range in the GI tract, the transit time across the intestinal wall and first-pass metabolism. For this reason, BA studies were developed as part of human clinical trials to establish the rate and extent of the absorption of orally administered drugs and determine the optimal dose concentrations.

In traditional BA studies, pharmacokinetic parameters are measured in vivo, such as the Cmax value, a measure of peak plasma concentration, and area under curve (AUC), as an indication of the drug exposure and clearance rate. Although these tests are effective, they require time-consuming, expensive human clinical studies. What’s more, when drugs are extensively metabolized, in vivo trial costs can escalate with the addition of urinary and fecal recovery and metabolite analysis. Certain drugs, such as highly variable or addictive compounds and those that carry severe side effects, also present ethical concerns around extensive human trials.

What are biowaivers and why are they important?
The BCS was developed as a regulatory mechanism for drug developers to obtain waivers of clinical BA/BE studies for IR, solid, orally dosed drugs, while still maintaining high standards for therapeutic equivalence.1 BCS divides compounds into four categories based on their dissolution, permeability and solubility (see Figure 1). Class I drugs, such as propranolol, verapamil and metoprolol, exhibit rapid dissolution, and are categorized as highly soluble and permeable. Since none of these determinants are limiting, oral absorption will be complete at 85% or more if the compound is stable in the GI tract and excipients do not significantly affect the absorption of the active ingredient.2 These characteristics led to BCS Class I drugs being determined early in the advocation of the BCS method as compounds with in vivo bioavailability that can be easily predicted in vitro.

Figure 1: The relationship between solubility, permeability and BCS categories.

Many pharmaceutical organizations are already taking advantage of the fact that in vitro data provides an accurate surrogate for in vivo trials in Abbreviated New Drug Applications (ANDA) for the approval of generic drugs. However, this is not the case for the newer addition to the biowaiver eligibility: BCS Class III drugs with low permeability and high solubility, including ranitidine, cimetidine, atenolol and vancomycin. Drugs with this profile are also shown to have accurately predictable bioavailability in vitro. However, since their addition to the FDA-approved eligibility list in 2015, uptake has been relatively low, especially in Investigational New Drug (IND) and New Drug Application (NDA) submissions. This low uptake prompted the FDA to award Absorption Systems with a grant to understand the role of various excipients and their impact on drug permeation, with the view to increasing biowaiver applications for BCS Class III drugs.

Importantly, BCS biowaivers are independent of therapeutic class, and many more new and generic drugs may be eligible for faster, more cost-effective regulatory submission and approval through this method. It is estimated that the pharmaceutical industry could recoup over $128 million per year through the implementation of BCS categories and applications for biowaivers,3 notwithstanding the value to be gained from being the first to file an ANDA.

During the COVID-19 pandemic, regulatory bodies, such as the FDA and European Medicines Agency (EMA), were challenged along with drug developers due to regional lockdowns. Human trials were restricted as the risks of conducting in-person trials started to mount, and biowaiver applications increased as organizations looked for alternatives, and ways to test the safety and efficacy of their drug compounds or drugs or drug candidates. As we navigate our way into a post-COVID era, the effects on clinical trials are sure to be long lasting, but the shift towards in vitro alternatives will help to alleviate these challenges.
How does a BCS study work in practice?

A robust biowaiver application with strong supporting data needs a robust and well-designed BCS study. There are several stages to this process, considering the need to demonstrate permeability, solubility and dissolution throughout:

Critically, the required solubility, stability in gastrointestinal fluids and permeability studies can take place in parallel to the formulation process, further streamlining drug development and approval. The entire process, from eligibility checks to application, should take around six weeks to complete, and from a submission point of view, should take no longer than an in vivo study to evaluate.

Avoiding common pitfalls for a straightforward biowaiver application
Biowaiver applications should be straightforward, as they are designed to reduce drug development timescales, ensuring novel therapeutics and cost-effective alternatives are delivered as quickly as possible to the people who need them. But, as with any regulatory submission, the evidence must be available to backup all submissions, and this relies on robust studies that avoid the common pitfalls that litter the road to the biowaiver.

Knowing when not to apply for a biowaiver
Biowaivers are currently only available for IR, solid, orally dosed drugs with BA profiles that are accurately predicted through in vitro studies: drugs that are categorized as BCS Class I or III. Since BCS is neutral with respect to therapeutic class, it can be used for a range of therapies across both novel and generic drug types—but there are exceptions: Narrow therapeutic index (NTI) drugs and dosage forms intended for absorption in the oral cavity are not eligible for biowaivers.

Regional applications make a difference too. Although there has been increased effort to align the expectations of regulatory agencies when it comes to biowaiver assessment, some disparities still exist. The FDA’s support of Class III drugs in the updated guidelines released in 20172 has largely brought its expectations in line with EMA requirements, and work has been undertaken to harmonize the various BCS guidance across agencies through the International Council for Harmonization’s ICH M9 Guidelines.4 These guidelines have now been agreed upon and are in varying stages of implementation across key geographical jurisdictions, including Brazil, Europe, the U.S., Singapore, Canada, the Republic of Korea, Japan, China, Chinese Taipei, Switzerland and Turkey.

Poor BCS study design
A successful BCS study must demonstrate strong in vitro/in vivo correlation (IVIVC), and this can only occur if the study considers the important salient aspects of the in vivo system and how it relates to the condition the drug is intended to treat. A key component in generating accurate, reliable and actionable BCS data is the high permeability internal standard (HPIS); in BCS data submissions, the permeability of the drug must be more than the standard. Certain HPIS choices commonly used in permeability studies have a relatively high lower threshold of permeability (Papp) when used with human colon adenocarcinoma (Caco-2) cells. Caco-2 cells are the gold-standard monolayer system for testing in vitro permeability, having a full complement of all uptake and efflux transporters. By using an HPIS, such as minoxidil, which has an optimum Papp (see Figure 2), compounds with high in vivo permeability can be more easily identified. In turn, this leads to a more accurate IVIVC and removes the risk of submission rejection due to inadequate permeability profiles.

Similarly, failure to account for pH-dependent effects on the aqueous solubility of certain drug substances can lead to biowaivers being denied. Since orally dosed drugs encounter a wide range of pH conditions as they move through the GI tract, it is critical that drug developers can demonstrate the effect that changing pH has on the solubility and permeability of the drug. In the absence of in vivo demonstrations, this must be shown through studies across a broad pH range (pH 1.2-6.8 for solubility and pH 6.5 and/or pH 7.4 for permeability).

To highlight the connection between dissolution and permeability, a non-steroidal anti-inflammatory drug, indomethacin, was compared in both micro and nanoparticle sizes using the In Vitro Dissolution Absorption System (IDAS™). The nanoformulation directly improved the dissolution rate and this, in turn, has improved permeability across the Caco-2 monolayers. In human BE studies, the same formulations showed strong correlation, with a shorter timeframe (Tmax) needed to reach higher peak plasma concentration (Cmax) in the nano-sized formulations (see Figure 3).

Figure 3: Comparative data from the study of two formulations of indomethacin using IDAS™.

As with all regulatory submissions, data should be robust, easily repeatable and cover all parameters under which the drug could reasonably be impacted. This includes accurate solubility determination, dissolution data for all strengths, GI stability information and data relating to efflux transporters used in the cell line.

Mining the untapped resource of the biowaiver
Despite existing for a little over two decades, biowaivers are still being underutilized for drug development and approval. Pharmaceutical organizations are restricting biowaiver use to the safety of generics and well-established BCS Class I drugs, and are failing to maximize the time and cost benefits for the development of novel therapeutics, especially those in the Class III category.

With validated, well-designed and optimized BCS studies, biowaiver application is straightforward and eliminates the need for unnecessary human clinical testing (with its associated inherent risks) while still firmly assuring post-approval patient safety. Development time is shortened, reducing costs for new drug development and providing a competitive advantage when bringing generics to market. Above all, biowaivers provide the most definitive, validated approach to establishing drug absorption levels, not just achieving equivalence with in vivo studies, but often providing a safer, more accurate and more cost-effective approach than traditional clinical trials.

References
Jaleel Shujath is Vice President of Scientific Content at Absorption Systems. Before joining Absorption Systems, Jaleel defined and marketed technology solutions to the life sciences sector, including GE Healthcare, PBL Assay Science, ATCC, and OpenText. Jaleel is a Six Sigma Green Belt and a member of the Drug Information Association, Parenteral Drug Association, International Society of Pharmaceutical Engineers, and the Editorial Board of the American Pharmaceutical Review.

Rao Mukkavilli, Scientific Operations, Absorption Systems, is a drug metabolism and pharmacokinetics specialist with extensive R&D and CRO experience. He obtained his Ph.D. in Drug Metabolism and Pharmacokinetics from Manipal University. Throughout his career, Rao has supervised and mentored in-vitro ADME, in-vitro pharmacokinetics (PK), toxicokinetics, and bioanalytical mass spectrometry groups, and has collaborated with project teams for lead selection and optimization across a broad range of therapeutic areas. Rao has published his innovative work in 23 peer-reviewed articles.