Contract manufacturing organizations (CMOs) are always on the lookout for new ways to optimize efficiency in order to differentiate themselves from the competition. This often puts them on the leading edge of innovation in products and services.

So in a sense, taking stock of CMO views regarding which new product development areas are most in demand can give insights into how the overall technology segment and market may evolve. In addition, because CMOs need to run far more varied campaigns, and must operate under constant cost pressures, following the CMOs lead can also provide some perspectives on which new technologies may have the greatest potential for contributing to future improvements. Essentially, since they have the most at stake, if CMOs see a technology as a good idea, it may be a good bet.

In our 10th Annual Report and Survey of Biopharmaceutical Manufacturing Capacity and Production1 we examined new product development areas most desired by CMOs and compared them to biotherapeutic developers’ interests. We found some substantial differences in preference between the two groups.

For CMOs, the top area in demand for better innovation is in downstream processing; this also correlates to where the industry is experiencing problems. Specifically, disposable purification products top the list. Here, 61.1% of CMOs want their suppliers to focus their development efforts on better products. Interestingly, only half that number of biodevelopers (30%) feels the same away, with disposable purification products ranking fourth among that group. The interest among CMOs in single-use (plastic) devices also relates to that segment’s need for flexible manufacturing, multiple campaigns, and technologies that speed up project turnaround.

Second on the list among CMOs are disposable bags and connectors and process development (downstream) services, each cited by 39% of respondents. The former was the top area in demand among biodevelopers (by 44%), while the latter was in the fifth spot among developers, cited by 29%.

Despite sharing similar levels of desire for innovation in disposable bioreactors (roughly one-third of each group wants their suppliers to focus their efforts there), CMOs and biodevelopers show some significantly different priorities for: 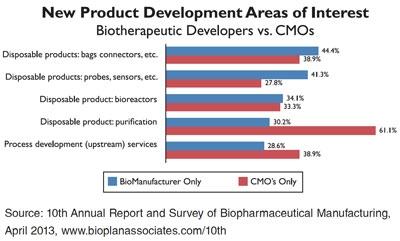 Fig. 1: Selected new product development areas of interest: Biotherapeutic Developers vs. CMOs
We also found that CMOs expressed much higher interest in Design of Experiment (DoE) compared to product developers. CMOs are presumably involved in designing more bioprocesses with clients seeking state-of-the-art DoE to satisfy FDA expectations. And with DoE methodologies not standardized, each company designing a bioprocess needs to only consider its approach to DoE once, as each product moves through development. In contrast, CMOs have to deal with diverse companies, with DoE approaches varying with every single client and product they are involved with.

It’s somewhat less surprising that biomanufacturers are generally more interested in innovative analytical assays than CMOs. Separately, we found a similar skew when we asked respondents to identify which of a list of assays needed improved testing methods most urgently for biomanufacturers.

Overall, biopharma developers reported higher desires for improved assays for the majority of the areas we queried. For example, they were more likely than CMOs to see an urgent need for new or improved testing methods in: 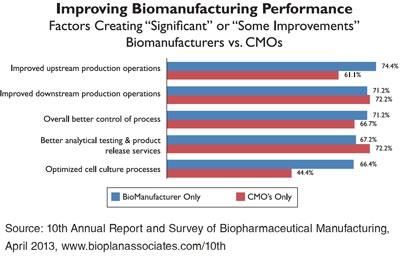 Fig. 2: Selected factors in biomanufacturing performance creating “Significant” or “Some” improvements, Biomanufacturers vs. CMOs
There were a few standout areas, though, in which CMOs clearly see a need for improvement. First among those was biotech drug comparability (for in-house manufacturing changes as well as biosimilars), for which 56% of CMOs recognize a need for new or improved testing methods, compared to 39% of biodevelopers. CMOs are also seeking progress in bioassays of proteins with multiple functional domains, cited by exactly half of the CMO respondents, compared to 29% of biodevelopers.

Although relatively few respondents from either group singled out disposable pH as an assay area in urgent need of improvement, pH sensors appear to be more in need of improvement than any others, according to separate results from our survey. (When we asked disposables users which of a number of single-use sensors they would like to see introduced or improved, pH topped the list, ahead of dissolved oxygen, cell density, CO2, glucose and in-line titers.)

Biomanufacturers More Focused on Upstream than Downstream
As mentioned, disposable purification equipment is the innovation area that CMOs are most interested in. With all the recent improvements in upstream titers, downstream purification has become a bottleneck preventing greater capacity utilization. One would expect that demand for new, innovative solutions in this area would be high — but it does not yet seem to be a focus for biodevelopers.

Conversely, it appears that biomanufacturers continue to be more focused on upstream innovations than CMOs — and one explanation may be that they appear to be getting more out of improvements in that area.

Separately in our study we asked respondents to indicate which factors have created “significant” or “some” improvements in biomanufacturing performance at their facility during the past 12 months. Among biomanufacturers, the top factor was “improved upstream production operations,” cited by almost three-quarters (74%) as creating improvements. The same factor was cited by 61% of CMOs, good only for the seventh position out of the 15 factors we identified.

CMOs reported relatively greater performance improvements in many other areas queried. The most significant differences reported concerned: With CMOs generally developing more bioprocesses (products) and with efficiency in operations (profitability) being a major concern, this presumably results in more effort being directed at implementing improved process design and control and overall plant integration. CMOs are clearly reporting more improvements in these areas. Also, as previously noted, with CMOs involved with more products/bioprocesses, they have more opportunities to see trends for improvement from such things as implementing DoE, more process automation and better plant design.

Overall, the top areas for improvements now involve process development, operations and control. This is in line with the industry’s continuing concentration on increasing productivity, particularly in manufacturing. It was surprising to see the varied responses to these questions between product developers and CMOs, with the product manufacturers reporting more frequent implementation of process-related improvements. One might typically expect CMOs, with their high project turnover and need to do it right quickly and the first time, to be out in front of product manufacturers in terms of implementing process improvements. Perhaps, we are seeing the result of increased FDA concerns and fallout from major pharma manufacturing failures, with these publicized problems placing more demands on product manufacturers and FDA. CMOs remain predominantly involved in smaller-scale R&D and clinical supplies manufacture, where regulatory manufacturing-related requirements are less strict. And there have been few recent prominent reports of biopharma CMO manufacturing failures, with product developers/manufacturers being the ones primarily affected by FDA inspection and other quality failures.

Cost is a Concern for CMOs
Our data shows that for the time being, CMOs are less focused on innovations on the upstream side. That may be the result of the biotherapeutic developer’s business model, which is focused on scaling up fewer products in-house, and therefore has more flexibility to implement new products and otherwise optimize bioprocessing. Nevertheless, as the industry begins to adopt more modular, flexible biomanufacturing facilities, we will likely see a greater focus among both groups on disposables innovation — whether upstream or downstream.

Cost may present a short-term hindrance for CMOs, though. As part of our broad industry study, we asked respondents the key areas to address in order to avoid future capacity constraints. Our results showed that CMOs were, not unexpectedly, more focused than developers on more cost-effective disposable, single-use products (47% vs. 36%). It’s interesting to see CMOs more focused on cost-effective disposable products; CMOs appear to be relatively satisfied with the performance of single-use products, but they’re not as happy with the cost of those devices.

Other results from our study support those findings. When we asked biodevelopers and CMOs the single most important reason for not increasing use of disposable technologies, fully 20% of CMOs cited their high cost, compared to only 4.3% of developers. In fact, cost lagged only concerns surrounding leachables and extractables (also the top concern for biodevelopers) as the most important reason for CMOs to not increase their use of disposables.

Into the Future
The biopharma industry is evolving and demanding new and improved bioprocessing technologies to reduce costs, increase efficiencies, and improve weak development pipelines. Many large pharma companies today are devoting development efforts on biologics rather than small molecule drugs. In fact, most are now spending 40% or more of their R&D on biopharmaceuticals. To facilitate this trend, innovation into improved productivity continues unabated and is a primary driver for many of the current biopharma trends.

For CMOs, desire for innovation will likely surround the key question: Which expression systems, or single-use manufacturing will reduce long-term production costs? Some of the trends we see in our industry studies support a future vision that includes: We would expect to see increasingly rapid adoption, among CMOs and biotherapeutic developers, of single-use systems for the majority of new commercial manufacturing facilities during the next five years, and we similarly expect continuous bioprocessing to follow a similar trajectory. Use of these products is likely to further increase with hybrid systems that use bolt-on-type technology to retrofit components unit operations for existing systems. Other conventional technologies adaptable to continuous use, such as centrifugation, will also enjoy increasing adoption in coming years.

CMOs are already at the forefront of disposables adoption. Will they be on the leading edge of the move to modular, flexible facilities, too?

References Eric S. Langer is president and managing partner at BioPlan Associates, Inc. (bioplanassociates.com), a biotechnology and life sciences marketing research and publishing firm established in Rockville, MD in 1989. He is editor of numerous studies, including “Biopharmaceutical Technology in China,” “Advances in Large-scale Biopharmaceutical Manufacturing,” and other industry reports. He can be reached at elanger@bioplanassociates.com and 301-921-5979.