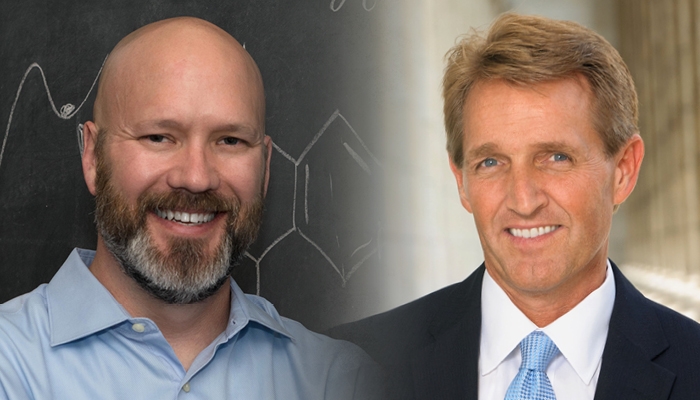 CPhI North America will take place from April 30 to May 2 at Lakeside Center, McCormick Place, Chicago. Both keynotes feed into the show’s central theme of Fostering Innovation in Drug Development and Manufacturing in a New Era of Regulation.

With nearly two decades of experience on Capitol Hill in both the Senate and the House of Representatives, Senator Jeff Flake is renowned for his bravery in speaking out against the current administration, his principled stands on spending and free trade, and his shrewd negotiations and bipartisanship on complicated issues such as immigration. During his keynote, Senator Flake will share his views on pharma manufacturing, healthcare innovation and the direction of healthcare as he sees it under our current structure of divided government, as well as scenarios as he sees them for beyond 2020. This discussion comes at a time when healthcare is one of the key and most contentious focal areas of American politics, particularly in the run-up to the 2020 Presidential Election.

“Both political parties understand the potency of healthcare as a campaign issue, but in the short term we can expect both parties to play to their base with no significant policy changes—especially in an era of divided government,” said Senator Flake on the current state of the industry. “And in the long-term, the pharmaceutical industry will likely continue its efforts to find new wonder drugs while policymakers grapple with impatient constituents struggling with high prescription drug costs.”

As the chief technology officer and co-founder of Numerate, which uses drug discovery data and artificial intelligence (AI) algorithms to accelerate and optimize the drug discovery process, Brandon Allgood currently leads research and development for Numerate’s AI platform. He has 15 years of experience in AI, mathematical modeling, and large-scale cloud and distributed computing. In Dr. Allgood’s presentation, he will discuss innovation from a technology perspective. He will introduce the topic of AI and discuss how it is already being used in the pharmaceutical industry. He will then share his opinion on where the industry needs to head, what organizations need to consider for the increasing implementation of AI and what the industry is currently doing to get there.

“AI is changing the way pharma performs research and conducts business, but most within pharma still don't have a good grasp of what AI is (and isn't) and how it can be applied effectively,” said Allgood. “During my keynote, I will introduce the topic in a grounded way because those organizations and people that don't come up to speed on AI will likely be left behind.”

“We are thrilled to have two diverse keynote speakers this year in Senator Flake and Dr. Allgood,” said Joseph Marks, brand director for CPhI North America. “With healthcare remaining a significant and divisive political issue, Senator Flake’s take on this subject in the current climate promises to be fascinating. Dr. Allgood’s vision to harness the potential of Artificial Intelligence and Machine Learning in drug development will provide key insights onto what we can expect to see as these technologies start to gain significant traction. Both speakers will no doubt provide attendees with talking points well beyond the event itself.”