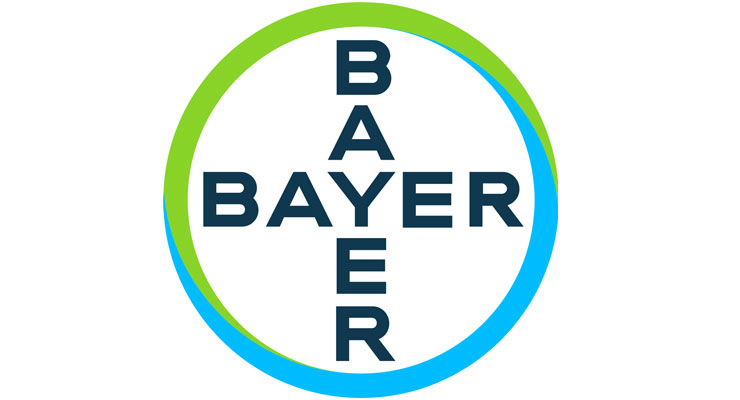 This past year, Bayer advanced several assets and submitted applications for a number of drug candidates and approval expansions for key products. The most notable of which are Nubeqa (darolutamide) in castration-resistant non-metastatic prostate cancer, and Xarelto (rivaroxaban) for Venous thromboembolism (VTE) treatment in children.

Offering significantly increased overall survival, Nubeqa was approved in the U.S. for the treatment of non-metastatic castration-resistant prostate cancer (nmCRPC) based data from the Phase III ARAMIS trial demonstrating that Nubeqa, a nonsteroidal androgen receptor antagonist, in combination with androgen deprivation therapy, delays worsening of disease-related symptoms in men with nmCRPC. In January 2020, Nubeqa was approved in Japan for nmCRPC, followed by approval in the EU.

Bayer’s top seller Xarelto was approved by the FDA in October for the prevention of VTE in acutely ill patients at risk for thromboembolic complications who are not at high risk of bleeding. Further, findings from the Phase III EINSTEIN-Jr. trial showed efficacy and safety of Xarelto in children with venous thromboembolism, similar to those seen in previous studies in adults. In November, Bayer submitted an application to the European Medicines Agency (EMA) seeking approval.

Also notable, in September, the European Society of Cardiology (ESC) recommended that Xarelto vascular dose plus aspirin low dose should be considered in the treatment of patients with chronic coronary syndromes at high risk of further events. Another ESC guideline recommends this regimen in patients with diabetes and lower extremity arterial disease.

In oncology, several candidates are advancing. Bayer was granted Breakthrough Therapy designation for Aliqopa (copanlisib) for the treatment of patients with relapsed marginal zone lymphoma (MZL) who have received at least two prior therapies. MZL is a form of indolent non-Hodgkin lymphoma (iNHL).

Also, precision oncology therapy Vitrakvi (larotrectinib) achieved a high level of efficacy in both adults and children with tropomyosin receptor kinase (TRK) fusion cancer and brain metastases–primary tumors of the central nervous system. In addition, clinical data showed a high response rate even with an expanded dataset, while median overall survival was more than three years.
In November, the Phase III study VICTORIA evaluating the use of vericiguat in patients with chronic heart failure with reduced ejection fraction (HFrEF) met its primary endpoint, reducing the risk of cardiovascular death or heart failure hospitalization versus placebo, when given in combination with available heart failure therapies. Vericiguat, a first-in- class soluble guanylate cyclase (sGC) stimulator, is designed to boost a cell signaling pathway that helps relax blood vessels and increase blood flow. It's being jointly developed with Merck in the U.S. and Canada to treat patients with worsening chronic heart failure.

Other key approvals include Vitrakvi and Gadavist. Vitrakvi received tumor-agnostic approval in the EU for the treatment of solid tumors that display a neurotrophic tyrosine receptor kinase (NTRK) gene fusion with locally advanced, metastatic disease, or where surgery is likely to result in severe morbidity, and where no satisfactory treatment options exist.
Lastly, Gadavist was approved by the FDA as the first and only contrast agent for use in cardiac magnetic resonance (MR) imaging to assess myocardial perfusion and late gadolinium enhancement in patients with known or suspected coronary artery disease (CAD).

Discontinued Assets
In September, the company discontinued the development program for its anti-TFPI antibody BAY 1093884 for the treatment of hemophilia for safety reasons after a Phase II trial investigating the safety and tolerability of BAY in hemophilia A or B with or without inhibitors was halted.

Shortly thereafter, development of its TASK channel blocker BAY 2253651 was discontinued after it failed to demonstrate sufficient efficacy in a Phase II trial in the treatment of obstructive sleep apnea.

Following the acquisition of Loxo Oncology by Lilly in February, Bayer exercised a change of control clause in its licensing agreements with Loxo Oncology. As a result, Bayer now has exclusive licensing rights for the global development and commercialization of Vitrakvi (larotrectinib), including the U.S., and the investigational drug selitrectinib (BAY 2731954, formerly: LOXO-195). Bayer is also working with Foundation Medicine Inc. for the development of companion diagnostics based on its next-generation sequencing for new cancer drugs. The first project will be to develop a CDx test in the U.S. for Vitrakvi.

Also, a collaboration with Arvinas, Inc. aims to develop next-generation medicines for cardiovascular, oncological and gynecological diseases. The four-year agreement includes an upfront payment and R&D support, as well as a direct equity investment.

Further, an agreement with Exscientia Ltd. will explore early research projects to treat cardiovascular and oncological diseases leveraging Exscientia’s AI-driven drug discovery and design. Under the agreement, which is initially set to run for three years, the companies aim to identify and optimize novel lead structures for potential drug candidates.

Also, an expanded partnership with Evotec SE in women’s health includes a new five-year, multi-target collaboration to develop multiple clinical candidates for the treatment of polycystic ovary syndrome (PCOS). PCOS is the most frequent endocrine disorder in women linked to metabolic dysfunction and the most frequent cause of female infertility.

Finally, Bayer entered an exclusive license agreement with Daré Bioscience for Ovaprene, a hormone-free, intravaginal ring that is currently in clinical development for pregnancy prevention. If approved, it could be the first monthly non-hormonal contraceptive product.