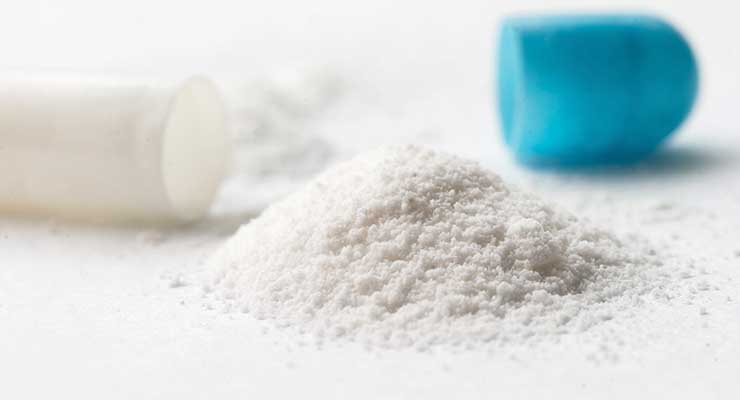 The global drug candidate pipeline has increased steadily in the past ten years,1 and so too has the physiochemical complexity of the APIs used in new targets. Consequently, around 90% of candidates in pre-clinical stages present significant bioavailability challenges.2 This has subsequently stimulated the need to evaluate the use of bioavailability enhancement (BAE) technologies in early developmental phases, and their commercial suitability.

There are several BAE technologies on the market and in recent years, one technique has become increasingly the de rigueur approach, namely, spray dried dispersion (SDD) or spray drying. While it was previously perceived as expensive and less accessible, confidence in the approach has risen thanks to the circa 20 commercial products formulated by this technology.

The problem: many of the new drugs exist in a crystalline form by nature, which makes them relatively insoluble, as considerable energy is required to overcome the crystalline lattice structure.3 However, the solubility—and therefore bioavailability—of crystalline APIs can be greatly enhanced by creating an amorphous solid dispersion (ASD), for which SDD can be used. The process involves spraying and then quickly drying a solution containing both the API and excipient, which produces a dry solid dispersion of drug substance in a polymeric matrix. These ASDs possess much greater solubility than the API alone. The amorphous material is then diluted with a high molecular weight polymer to help maintain the amorphous stability during storage and upon dissolution. More often than not amorphous stability only needs to be prolonged for a few hours upon dissolution, ensuring that the API remains in solution until it has passed through the gastrointestinal tract.

The popularity of spray drying over other BAE technologies has drastically increased for many reasons. Firstly, it can be quickly developed for in vitro screening tests to get an idea of its efficacy for the drug in question, using only a small amount of material. We can contrast this with hot melt extrusion, which requires much more development work (time) and considerably more API material. Further complicating this, the compound and polymer/excipient used must be processed at a high temperature which isn’t suitable for heat-sensitive APIs and polymer excipients.

There are also significant challenges associated with lipid formulation. For example, solubility issues arise in animal studies, where compounds tend to precipitate out of solution before absorbed in blood stream. The compound’s long-term stability is also extremely hard to predict as accelerated stability testing is difficult to conduct. Large capsule size is an issue when drug load is high, impacting swallowability and thus patient compliance. A final consideration for lipids is that the end dosage options are more limited, it will have to be delivered in a softgel or liquid filled hard capsule, which is more expensive than tablet, and is associated with other stability issues such as cross-linking by gelatin, capsule leaking or storage restrictions.

Other advantages of spray drying techniques are that it allows flexibility with the options of advanced delivery technologies, including taste-masking, modified release, and fixed-dose combination. For example, we recently used SDD in an advanced stage to deliver a delayed release product. And there is still plenty of room for innovative spray drying applications too, with the industry already exploring the potential of aseptic and nanoparticle spray drying.

In one case, a global biotech client with an innovative drug in preclinical stage came to us to change the formulation only four months before IND filing. The traditional API-in-Capsule (AIC) formulation did not achieve the desired drug exposure in animal studies and so needed an enabling formulation to be selected and applied quickly. To solve the problem, we ran an in-parallel formulation screening comparing the drug exposure of conventional AIC formulation, solution formulation (self-microemulsifying drug delivery system) and SDD. The result showed that both SDD and solution formulation greatly enhanced drug exposure level, confirmed with in vivo tests. The client selected the SDD formulation for further development as it could also accommodate a higher dose strength (see Figure 1). 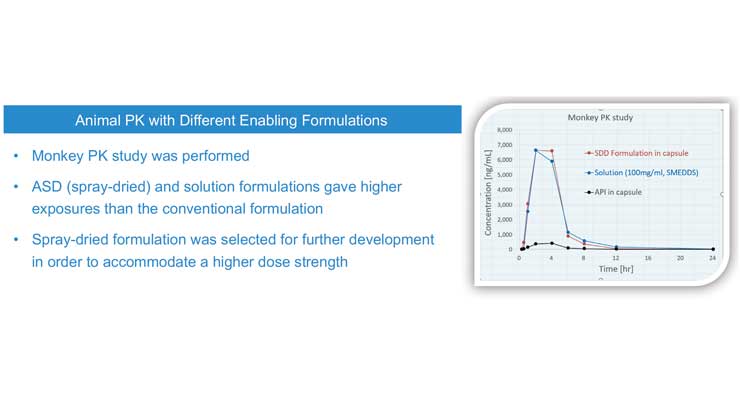 Of course, all technologies have unique challenges. Not all product classes are suitable for spray drying—for instance, hormones and steroids. Cost can be another drawback, as a lot of heat is needed to remove solvent from spray drying solutions. But in reality, the biggest current challenge for SDD is the lack of late-phase and commercial capacity. Although developing SDD formulations for drugs in early-phase is relatively quick and straight forward, few CDMOs possess spray dryers fit for late-phase and commercial capacity. The commercial spray dryers, such as PSD3 and PSD4, require large investments. This presents significant problems for drug innovators who have partnered with a contract provider for spray drying in early-phase without the capacity to scale-up as the compound progresses through to late-phase and commercial. The innovator may have to switch to a CDMO with a commercial-scale spray dryer, but the tech transfer can slow down development timelines by at least three to six months. Alternatively, innovators may even consider selecting a different BAE technology as their compound enters late-phase, but this too can slow development timelines due to the need for reformulation.

Taking this a step further, there are additional advantages of working on projects at an integrated site as in many cases the chemist and the formulator do not talk enough. There are gaps between late discovery phase, pre-formulation, and formulation teams. In contrast, at WuXi STA, the chemist, pre-formulation scientist, formulator, and analytical chemist are working closely together. They can then set up their TPP (target product profile) early and understand the end in mind when they are developing in early phases, which often helps address potential late phase challenges. Our approach is BAE technology screening for a specific compound, but then a long-term and holistic view as early as we can.

Another advantage for manufacturers with API manufacturing and BAE technologies proximal to one another is a reliable and timely API supply for formulation development, which mitigates development delays. Besides, consistent solvent and excipient usage throughout drug substance and drug product stages can help better impurity control.

In another case, a client came to us in need of quickly scaling up the manufacture of a poorly soluble compound for both drug substance (DS) and drug product (DP) with SDD formulation. We were able to complete registration batch manufacturing of the drug substance and the drug product using spray drying in under a year because of our integrated approach to the project, with development shared between our Shanghai and Changzhou sites that are within 2-hour driving distance. Ultimately, having our DS, DP and enabling technology sites proximal to each other reduced logistical costs and substantially expedited development timelines, clearly demonstrating the benefits of having integrated sites (see Figure 2). 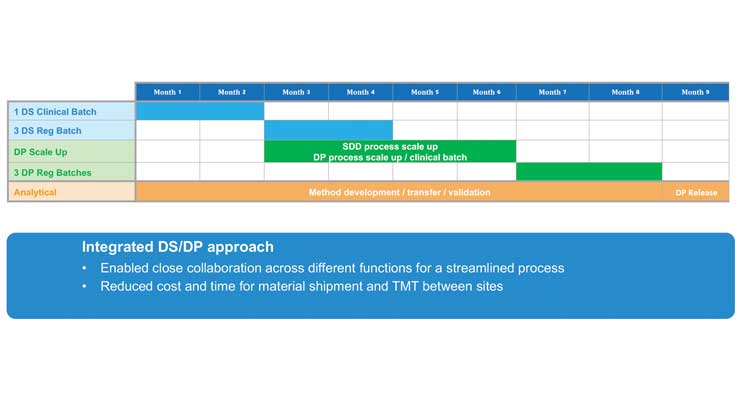 However, there are other limitations to commercial-scale spray drying beyond capacity. For example, anything with a solubility lower than around 10 mg/mL in the spray drying solution will ultimately be difficult to commercialize, due to the great energy cost of removing the solvent with heat, unless the product has a very low expected market volume such as orphan drugs. One approach in these cases is to use spray drying as a relatively quick approach for early phase studies, so the client can assess the later phase developability for the molecule in terms of scalability and manufacturing cost.

Overall, the trend towards spray drying is growing quickly in all stages of drug development and, as a continuous process, it also lends itself to QbD principles—scale-up between dryers is minimal using vertical parameters. In fact, such has been its commercial success in the last few years that both large pharma and small biotechs are comfortable looking at enhancing bioavailability this way—it’s become a more and more established approach. Yet its accessibility, as an early phase formulation technology, is not currently matched by its commercial availability—so innovators that want to avoid costly delays in programs would be wise to partner with CDMOs that can advance the process at scale.