Is base editing the solution for solid tumor-based cell therapy? 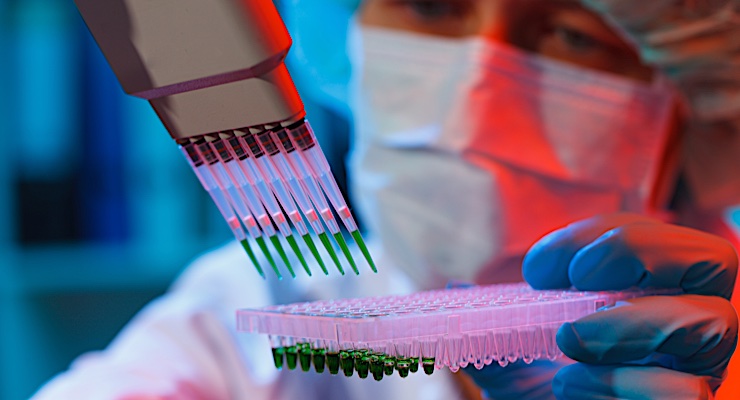 Base editing, a new player in the gene editing arena, could have an important role in the development of immune-based cell therapies to treat solid tumors. Using cell therapies, such as CAR-T cells, in solid tumors remains challenging: the current word on the street is that such chimeric antigen receptors (CARs) will need multiple gene modifications to make them efficient and it is in this space that base editing could have a substantial advantage.

Immune-cell-based therapy is an exciting cell therapy approach to treat cancer where the natural defenses of a patient’s immune system are used to target and kill cancer cells. Hopes were high following the initial FDA approvals of the first autologous CAR-T therapies for Novartis’ KYMRIAH (Aug 2017) and Gilead/Kite Pharma’s YESCARTA (Oct 2017), both for blood-based cancers, but translating these successes into solid tumors remains a challenge. This is a consequence of the complexity and heterogeneity of solid tumors together with the immune inhibitory nature of the tumor microenvironment.

For T cell-based therapies to work, the patient is treated with modified T cells that are rendered capable of identifying and killing tumor cells and, through this, generating a wider immune response against the tumor. Two key approaches used to modify T cells are through expressing a T cell receptor (TCR) known to target the tumor cell or a CAR. Other approaches include using and/or modifying natural killer cells, gamma delta cells or tumor infiltrating lymphocytes. It is not clear which approach will provide the most effective treatment option and in fact it might be that each tumor type responds better to one approach or to a combination of approaches. Irrespective of the approach, it is clear that the current therapies all face similar challenges; the risk of graft vs host disease (GvHD), a lack of durable remissions, on-target or off-target toxicity and cytokine release syndrome.

Autologous or allogeneic?
Another layer of complexity for T cell-based therapies lies with the source of T cells—using the patient’s own (autologous T cells), or a donor or iPSC-derived T cells (allogeneic). Each approach has advantages and challenges. Briefly, autologous treatments are attractive because they mitigate the risk of immune rejection and GvHD when infused back into the patient. However, they require a complex manufacturing process that necessitates specialist equipment local to the patient to enable the isolation of their T cells followed by rapid manufacture to transform them into engineered T cells ready to infuse back into the patient. At all points during this manufacturing pipeline, the product must be kept sterile and tracible to ensure the correct cells are transfused back into the correct patient. The allogeneic T cells approach is appealing because of the possibility that these could be engineered to be universal donor cells (suitable for all or most patients). Such cells can be manufactured in bulk and administered to multiple patients all over the world. This bulk manufacturing would attract cost-savings once a critical mass of therapy is reached. It could also allow for engineered T cells to be available “on-tap” to any patient, a game-changer for particular patients whose own T cell count is either too low for engineering, or that transduce poorly with the engineered construct during manufacture.  The challenge for allogeneic T cell therapies is the ability to generate ‘cloaked’ T cells that do not provoke an immune-response in the patient, as this could kill the engineered T cells after transplantation such that they have no efficacy or potentially lead to the death of the patient as a result of a disseminated cytokine storm. Despite these challenges, in April 2019 the US Food and Drug Administration (FDA) approved the first allogeneic CAR-T for investigational use in patients with multiple myeloma and more are expected to follow.

Role of gene engineering in cell therapy
To try and achieve a stealth allogeneic T cell that flies under the radar of the patient’s immune system, genetic engineering is key. Although T cells can be engineered to express a specific TCR or CAR, additional genetic changes are required to provide a cloak of invisibility, prolong the survival of the cells in the patient and enable them to function in an immune suppressive tumor microenvironment. From a simplistic point of view, one could view the modified CAR or TCR as a sat nav, with the T cell being the engine. You need both to get to your destination and, if you’re able to improve your engine, it’s possible the outcome could be achieved faster and in a more reliable fashion. There are several gene knockouts or gene knockdowns that are seen as a natural first step to improving the properties of engineered allogeneic T cells and these are summarized in the table below:

As there are multiple gene knockout options, a gene engineering technology capable of making multiple gene edits with as few off-target effects as possible is needed. Indeed, it is conceivable that an effective allogeneic T cell-based therapy might require ten or more gene edits.

This prompts the question “What is the best gene editing platform or technology to support multiple gene edits?” On the surface of it, and owing to its phenomenal adoption in research labs worldwide over the past decade, most currently use the gene editing approach provided by CRISPR-Cas9. CRISPR was first commercialized in 2012 and quite staggeringly made its debut in a clinical trial for cell therapy in June 2016. Although CRISPR is an efficient gene editing tool, its mode of action of generating double-strand breaks in the DNA could be a source of concern. DNA double-strand breaks, which tend to be repaired by the cell’s repair machinery in an error prone fashion, can cause unintended changes in the genome of engineered cells. Although there are methods for minimizing these ‘off-target’ effects when single genes are targeted, targeting multiple genes in one cell all at the same time could lead to genome-altering insertions, deletions and/or chromosomal translocations. The impact of this on a patient could be that the cell therapy is effective but the off-target genetic changes lead to deleterious side-effects, impacting patient recovery and potentially survival. Well-known alternatives to CRISPR include transcription activator-like effector nucleases (TALENS) and zinc finger nucleases (ZFN). These approaches have slightly different safety profiles to CRISPR and while optimized for single gene edits or knockouts, multiple gene knockouts still present a challenge for these technologies. Freedom to operate using these technologies in the therapeutics space can also be challenging, particularly for start-up and biotech companies.

Opportunity for base editing
The potential deleterious impact of off-target effects, particularly for multiple gene edits has opened the door to a newcomer on the gene engineering scene: base editing. This technology first gained prominence from peer-reviewed papers published by researchers from Harvard University.1 Others, such as Rutgers University, have also developed base editing platforms.2 In brief, base editing uses a deaminase enzyme to make a specific base pair change in the DNA. The base pair alteration can either be an A to G or a C to T depending on which deaminase is used. Importantly, the CRISPR-Cas system is used to guide the deaminase to the base pair that is going to be altered, but in this version of CRISPR-Cas, a DNA double-strand break is not made, meaning that the off-target effects with base editing in terms of insertions, deletions or translocations should be substantially reduced.

On the surface, this crucial characteristic makes base editing an excellent choice of gene editor for cell therapy—it can be used to specifically knock-out multiple genes through the introduction of stop codons or splice site disruptions with limited capacity to introduce substantial, large-scale chromosomal abnormalities. However, as base editing was first published in May 2016,1 substantial research is required to understand fully the utility of base editing in the therapeutic space and to appreciate its advantages and challenges compared with standard gene editing approaches, such as CRISPR-Cas, TALENs and ZFNs.

As is somewhat expected of a fashionable area for scientific research, the gene editing space does not stand-still for very long: Prime editing has followed hot on the heels of base editing. Unlike base editing, which makes changes to specific base pairs in the DNA, prime editing allows changes to be made to a run of base pairs by forcing the cell to use a DNA copying system that exists naturally in cells as part of the DNA repair mechanism. Initial data suggest3 that prime editing has higher off-target effects compared with base editing, in terms of introducing insertions and deletions, and more work is needed to understand the comparison and utility of base editing vs. prime editing. It will be interesting to see how prime editing evolves over the months and years within the cell and gene therapy space.

Although cell therapy has demonstrated its potential for driving complete remissions in some patients with hematological cancers, the next big step is to translate these early successes into patients with solid tumors. However, due to the complexity of solid tumors, this is not a simple or straight-forward process and multiple factors need to be considered. While the sat nav in the form of an engineered TCR or CAR is crucial, the T cell engine could be the natural starting point for improving efficacy in patients with solid tumors, as could the use of allogeneic rather than autologous approaches. The multiple edits that will be needed to deliver a stealth, engineered, allogeneic off-the-shelf T cell are only now being investigated in earnest and it could be that the new kid on the block, base editing, provides a compelling route forward.

Dr. Jonathan Frampton is a business development professional who has been working for Horizon Discovery for the past 9 years and currently as their Corporate Development Partner. He is always scouting for exciting novel technology that could complement Horizon’s already extensive gene engineering toolkit. In addition to this he works closely with Horizon’s partners to manage out-licensing opportunities.
Related Searches