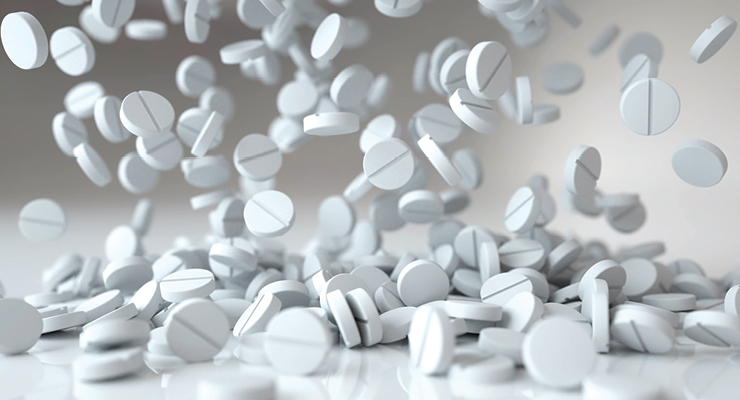 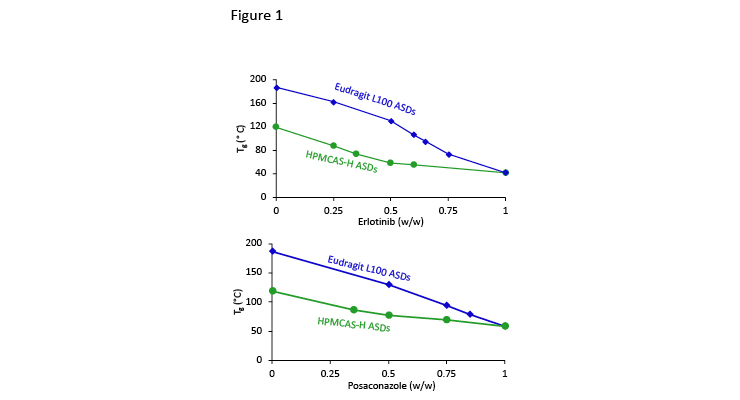 Figure 1. Dry Tg versus drug loading for erlotinib (top) and posaconazole (bottom) ASDs using either Eudragit L100 or HPMCAS-H as the dispersion polymer.1,2 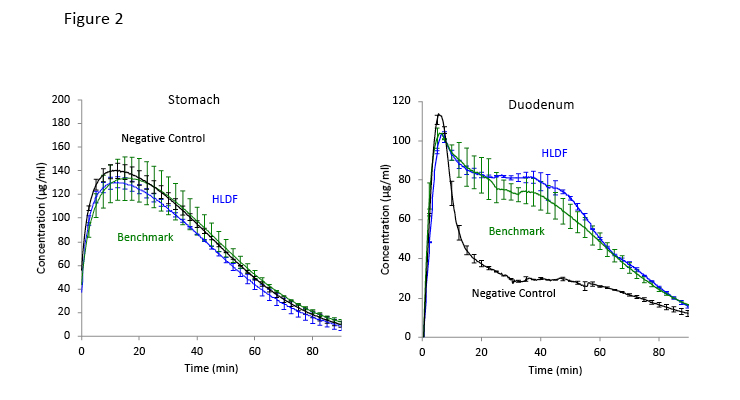 Figure 2. In vitro CTD performance of erlotinib tablets at a 100-mg active dose.1,11 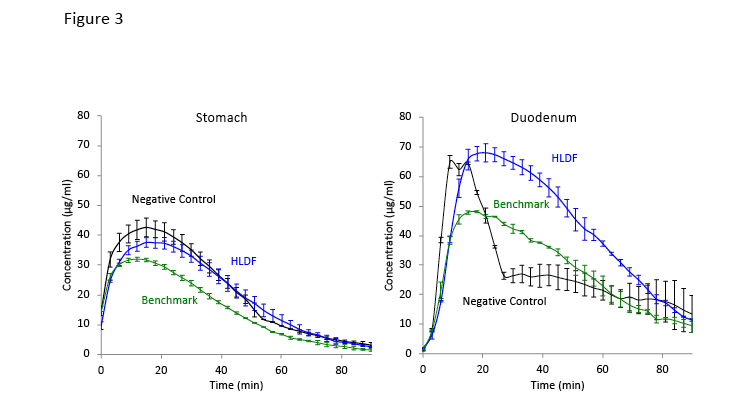 Figure 3. In vitro CTD performance of posaconazole tablets at a 100-mg active dose.2 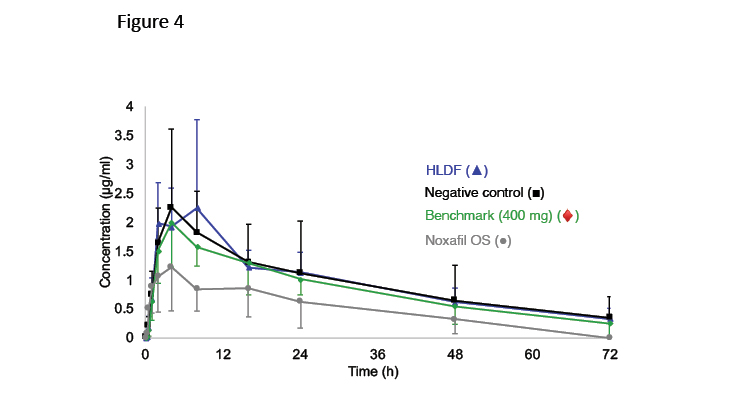 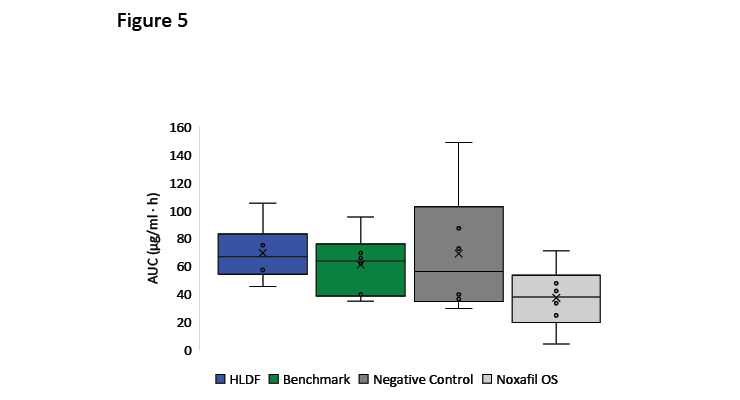 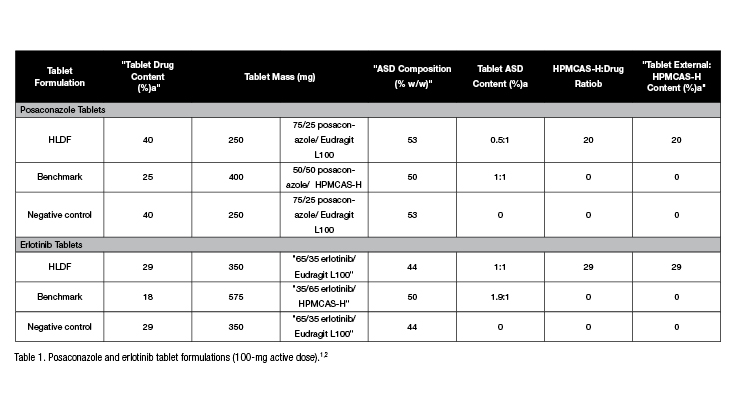 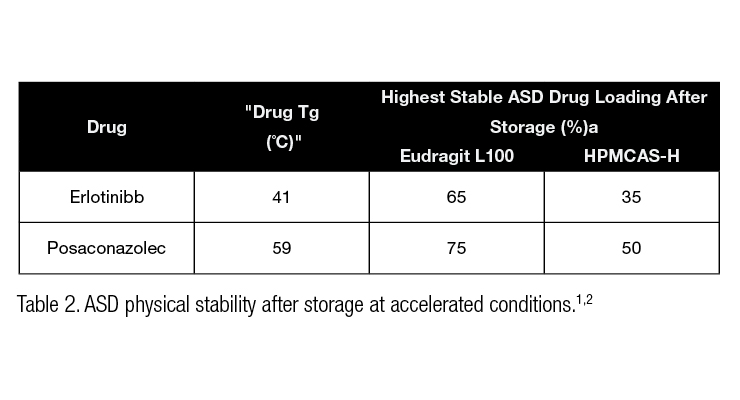 Amorphous solid dispersions (ASDs) can increase the bioavailability of poorly water-soluble drugs by increasing dissolved drug concentrations in the gastrointestinal (GI) tract. However, ASD dosage forms are often large or require multiple tablets or capsules to meet dose requirements, decreasing patient compliance, particularly among pediatric or geriatric patients who may have difficulty swallowing.

To address this challenge, a high-loaded dosage form (HLDF) architecture for ASDs was developed that strategically combines two different polymers—one “inside” and one “outside” the ASD—to maximize bioperformance, physical stability, and drug loading. The HLDF approach differs from traditional ASD architectures in which a single polymer “inside” the ASD must play dual roles—maximizing bioperformance and physical stability. This constrains the formulation by relying on a single type and amount of polymer, and often results in a dosage form with low drug loading. The HLDF architecture can reduce tablet mass by at least 40% compared to a traditional ASD tablet, with similar or better physical stability and performance.

In formulating an HLDF, two key factors must be considered: 1) maintaining physical stability and 2) providing the desired bioperformance. To achieve good physical stability at high drug loadings, it is helpful to select a dispersion polymer with a high glass-transition temperature (Tg) to help kinetically trap the drug in the amorphous state.3 The enteric polymer Eudragit L100—poly(methyl methacrylate-co-methacrylic acid) [PMMA] (1:1) (Evonik Industries, Essen, Germany) has proven to be a good choice. Its high Tg is 30°C to 70°C higher than other common dispersion polymers such as hydroxypropyl methyl cellulose acetate succinate (HPMCAS), hydroxypropyl methylcellulose (HPMC), polyvinylpyrrolidone (PVP), and polyvinylpyrrolidone vinyl acetate (PVP VA).4
However, Eudragit L100 is typically less effective at sustaining supersaturated drug concentrations in GI fluids compared to polymers such as HPMCAS.5,6,7 HPMCAS is a particularly effective concentration-sustaining polymer (CSP) due its amphiphilic nature when ionized at the pH of the small intestine.8

The HLDF approach capitalizes on the advantages of both types of polymers, leveraging Eudragit L100’s ability to maintain physical stability at high drug loadings without sacrificing supersaturation sustainment in GI fluids. In the HLDF approach, a CSP such as HPMCAS is included “outside” the ASD by granulating it with the ASD and typical tableting excipients. Strategically combining two different polymers, one “inside” and one “outside” the ASD, removes the constraint of the traditional ASD approach, in which a single dispersion polymer must maintain physical stability and sustain supersaturation in solution. Because higher drug loadings can be achieved with this architecture, the HLDF approach enables an overall increase in drug loading within the dosage form and decreases the dosage-form burden.

For each formulation, drug loading in the ASD was maximized by choosing the highest drug loading that produced an ASD that was physically stable after storage for four weeks at accelerated temperature and relative humidity (RH), as described below. The ASD loading in the tablet was maximized while still achieving rapid disintegration (i.e., < 3 min) and dissolution rate, and facilitating good downstream manufacturability.

Physical Stability
To maintain good physical stability, an ASD must remain homogenous and amorphous, without exhibiting changes in particle morphology (such as particle fusing) during its shelf life. For most spray-dried ASDs, the concentration of drug in the ASD exceeds the crystalline solubility of the drug in the polymer, leading to a thermodynamic driving force for crystallization. To facilitate good physical stability over the shelf life of an ASD drug product, the goal is to create a homogeneous ASD that is kinetically stabilized at relevant storage temperatures.

The Tg of the ASD is a key factor driving kinetic stabilization. When the ASD Tg is sufficiently higher than the storage temperature, molecular mobility can be low enough to limit drug diffusion, which is a precursor to crystallization.9,10 Since the drug Tg is usually much lower than the polymer Tg, increasing the drug loading in the ASD typically decreases the ASD Tg. In addition, it is generally true that the higher the polymer Tg, the higher the ASD Tg at a given drug loading. As shown in Figure 1, using Eudragit L100 (Tg = 187°C) versus HPMCAS-H (Tg = 119°C) as the dispersion polymer significantly increased ASD Tg at a given loading of erlotinib or posaconazole.

The physical stability of ASDs can be assessed by conducting aging studies at accelerated temperature and RH since these conditions tend to accelerate molecular mobility. Eudragit L100 and HPMCAS-H ASDs made with erlotinib or posaconazole at different drug loadings were stored at elevated temperature and RH for four weeks and assessed for amorphous content, morphology, and Tg.

Good ASD stability was indicated by (1) lack of sharp diffraction peaks in a powder x-ray diffraction (PXRD) diffractogram, (2) lack of fusing and morphology changes in scanning electron microscopy (SEM) micrographs and (3) a single Tg without melting events in the modulated differential scanning calorimetry (mDSC) thermogram. As shown in Table 2, Eudragit L100 gave stable drug loadings that were 1.9-fold higher for erlotinib ASDs and 1.5-fold higher for posaconazole ASDs.1,2 These results highlight the advantage in selecting Eudragit L100 rather than HPMCAS as the dispersion polymer when a high drug loading is desired.

In Vitro Dissolution
A controlled-transfer dissolution (CTD) test was used to evaluate in vitro dissolution of erlotinib and posaconazole tablets. In this test, a dosage form is introduced to a compartment with simulated gastric fluid (HCl, pH 2) and transits into a compartment with simulated duodenal fluid (67 mM phosphate buffer and 6.7 mM fasted-state simulated intestinal fluid [FaSSIF] powder, pH 6.5) at a monoexponential rate with a half-life of emptying of 15 minutes.

Drug dissolution profiles from the CTD test are shown in Figure 2 for erlotinib and Figure 3 for posaconazole tablets, respectively. For both drugs, the performance of the HLDF tablet and benchmark tablet was similar.1,2 Similar concentration sustainment was observed despite the HLDF tablet containing a lower ratio of CSP to drug than the benchmark tablet. In contrast, the performance of the negative-control tablet, which did not contain a CSP, was worse, due to more rapid crystallization of drug in the duodenum compartment.

In Vivo Testing
To determine whether incorporating a CSP “outside” the ASD would be as effective as the benchmark approach in which the CSP is “inside” the ASD, an in vivo study was conducted in fasted beagle dogs using the model drug posaconazole.2 A 100-mg dose (10 mg/kg) of posaconazole was administered using the HLDF tablets, benchmark tablets, negative-control tablets, and a commercial crystalline oral suspension (Noxafil OS). Dogs were pretreated with an intramuscular injection of pentagastrin (6 μg/kg, 60 μg/ml, 0.1 ml/kg) approximately 30 minutes before dose administration to increase gastric acid secretion and lower stomach pH.

The average blood-plasma concentration profiles for each formulation are shown in Figure 4. Box-and-whisker plots, comparing the area under the curve (AUC) of the plasma concentration-time profiles generated using noncompartmental analysis, are shown in Figure 5. The HLDF tablet showed equivalent AUC values compared to the benchmark tablet, demonstrating that incorporating the CSP “outside” the ASD was as effective as including it “inside” the ASD. In addition, the HLDF tablet showed the least variability in AUC of all formulations. For instance, the percent coefficient of variation (%CV) for the AUC was two-fold less for the HLDF tablet than for the negative-control tablet and Noxafil OS. Only the HLDF tablets had a statistically significant difference in AUC compared to Noxafil OS (p values < 0.05), with an average two-fold improvement.

Kilogram-Scale Manufacturability
To demonstrate the feasibility of making tablets at a kilogram scale using an excipient with a fine particle size (i.e., HPMCAS-HF) external to the ASD, erlotinib HLDF tablets were manufactured using a 5-kg pregranulation blend.1 Granulation was performed on a Gerteis Mini-Pactor roller compactor and tableted on a Korsch XL 100 rotary tablet press.

Conclusions
The HLDF approach can reduce tablet mass by at least 40% with similar or better physical stability and in vitro performance compared to a traditional ASD tablet. This result was demonstrated using the model drugs erlotinib and posaconazole. A study in dogs using posaconazole HLDF tablets showed equivalent in vivo performance to traditional ASD tablets. Kilogram-scale spray drying and tableting of the erlotinib HLDF formulation demonstrated excellent manufacturability. The HLDF approach can reduce tablet burden while achieving good performance, stability, and manufacturability for ASD drug products. As pharma and biotech innovators continue to advance bioavailability-challenged molecules to clinic and to market, ASD production methods that allow for high drug loadings may be beneficial.

Note: All Figures and Tables appear in the slider image box at the top of the article.